2018 marked the 90th Anniversary of James River Transportation. What was once a small single bus company is now one of the most respected passenger transportation organizations in North America. James River has grown to a fleet of 100 vehicles, with a professional staff of over 200 employees. The evolution of James River transportation is a bit unusual in that it is now a family owned and operated business after once being part of a larger corporate structure. In today’s business environment, such transitions usually work in the opposite direction.

Nine decades and multiple generations in any business is a great accomplishment. The secret of James River’s success is simple: thousands of loyal customers; and employees who are dedicated to exceptional performance. “It is important to create a structure for the James River Team to provide exceptional experiences for our clients. Our Servant Leadership style of management provides the resources, training and support for our TEAM”, Stephen Story, President. 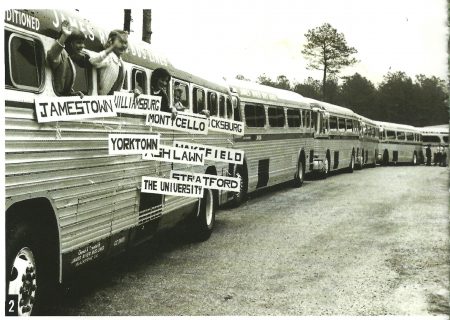 James River is recognized as a leader in the industry and has received numerous Awards recognizing its Safety Program, Superior Training System and Exceptional Customer Service. Because of its ability to adjust to a changing World with its innovative approach, the future looks bright!

Ninety years ago, a man by the name of William W. Briesmaster started a bus line from rural Virginia to Richmond. The route closely followed the path of the historic James River through central Virginia. Consequently, his bus line came to be known as The James River Route. 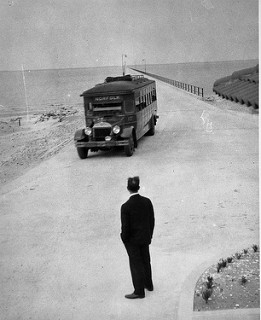 After a short, but groundbreaking moment in James River’s history, Briesmaster gave up ownership of the company and sold it to Mr. W.J. Sheppard who operated a vehicle maintenance garage in Buckingham County. As additional services were added, the name was changed to James River Bus Lines. 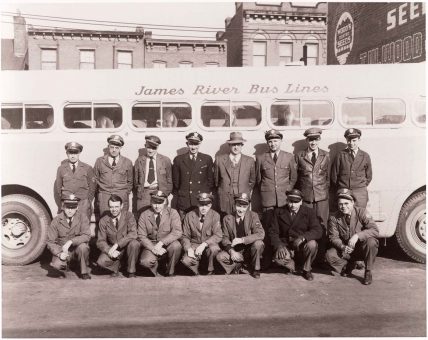 Sheppard operated the service until 1954 before selling it to Irving C. Hammock and James H. Rand. Along with a Chrysler Plymouth Dodge automobile dealership, they owned a company called Picket Service Company which provided transportation between Richmond and the busy United States Army Base, Camp Picket. The purchase provided a great opportunity to expand their passenger transportation business. 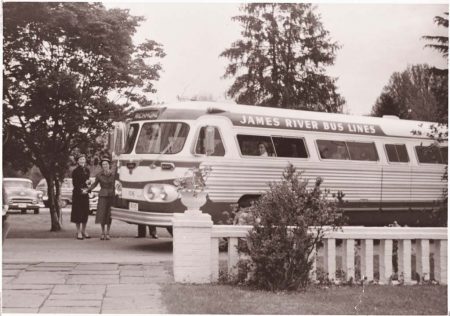 At that time, James River’s main service consisted of 3 scheduled buses operating between Buckingham and Richmond, VA, two charter coaches for leisure trips and two Highway Post Office Mail vehicles. The Mail Vehicles provided an interesting and diverse revenue stream. The vehicles had postal workers inside who would sort mail enroute to the destination, a popular delivery system at the time. 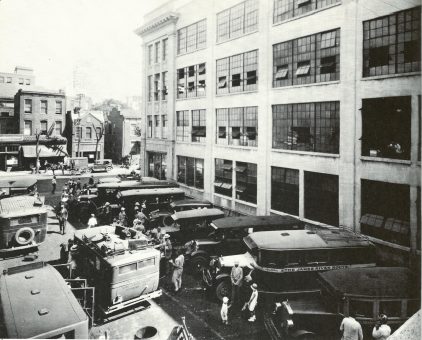 Because of increased business opportunities, James River’s operation was moved to Richmond, VA. Hammock and Rand began searching for an individual who could look after their transportation company while they remained in Blackstone, VA with the automobile dealership. 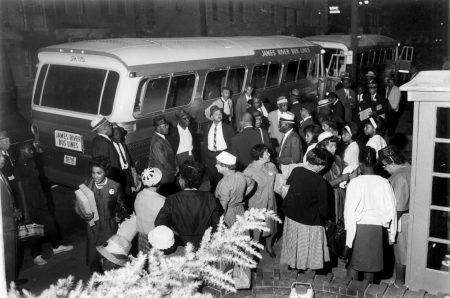 In August 1963, protesters boarded a bus at the Leigh Street YMCA in Richmond for a trip to the U.S. Capitol to participate in the March on Washington for Jobs and Freedom. An estimated 2,500 Virginians were among the roughly 250,000 marchers at the protest, which called for civil rights legislation and featured Dr. Martin Luther King’s “I Have a Dream” speech.

About that time, a man named Story had decided to enter the bus business. L. Woodrow Story, known by his friends as ‘Woody”, purchased a 1947 Aerocoach to transport students between his church, Westhampton Baptist, and the University of Richmond for worship service on Sundays. He also obtained the proper insurance and permits to provide charter service on the weekends while he sold automobiles full-time during the week. He became familiar with James River Bus Lines through the industry and often leased his coach and driving services to them. 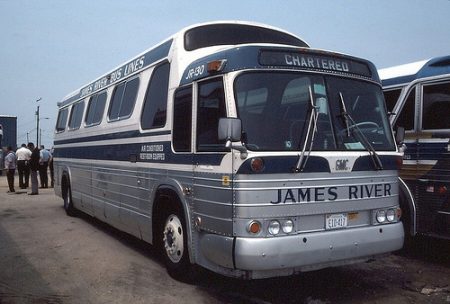 Hammock and Rand noticed Story’s enthusiasm and in 1959 hired him as their General Manager in Richmond. As the company grew, Story worked his way to Vice President. After enduring some tough economic times in the seventies, Hammock and Rand decided to sell the bus business and concentrate on their dealership. Because of the close relationship that had developed over the years, they decided to sell the business to Story. The deal was discussed, formulated and finalized over lunch during their weekly visit. On April 1, 1978, Woody Story became owner and President of James River Bus Lines. His partner and wife, Anne Story, was Vice President and later Vice Chair until her passing in 2000. 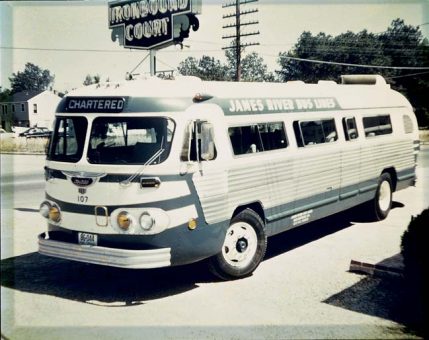 During the 70s and 80s several members of the Story family were involved in the operation. The daughter, Diane Story Hall, began in the Tour Department and later entered administration, overseeing accounting and human resources. Diane is currently Vice President and Secretary of the corporation. The younger son, Stephen W. Story, worked in the business through high school, progressing through most departments including maintenance, dispatch, safety and management. Stephen is currently President. Their oldest son, Dr. L. Woodrow Story, Jr, serves as Treasurer and is a retired Optometrist. 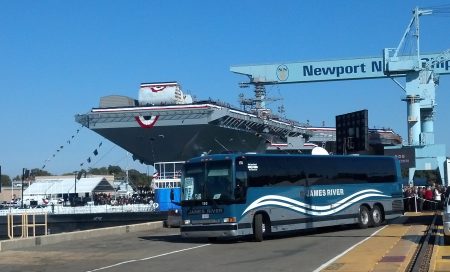 Under the leadership of Diane and Stephen, a Long Range Strategic Plan was developed utilizing an updated SWOT analysis. James River had long suffered from very seasonal activity and relying on a relatively small customer base. The newly devised Strategic Plan would take advantage of James River’s transportation and customer service expertise to expand into other types of passenger transportation. The added services would stabilize the ups and downs during the year and add revenue sources in case part of the business declined. 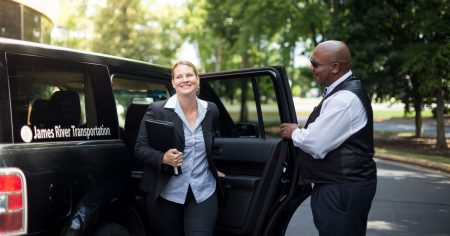 The company that started out with a few buses in the 1920s has become a full-service passenger transportation organization with a wide variety of services and vehicle types. 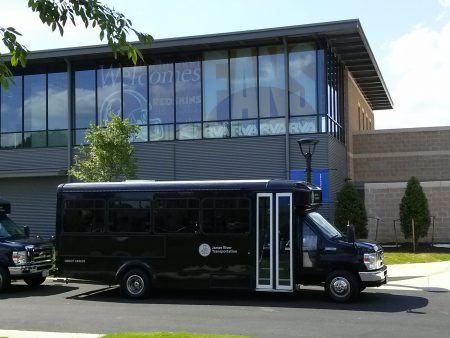 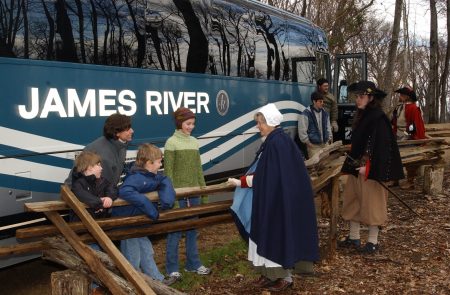 Stephen and Diane still maintain the high standards taught to them by their father. Every decision that is made is based on James River’s Core Values and Mission Statement:

We will WOW our customers through our continued passion to provide superior transportation services by demonstrating our core values with dedicated team members, and utilizing innovative strategies and technology. 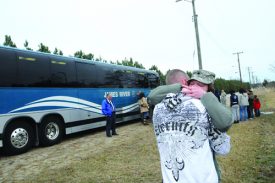 Spc. Danielle Rubicheaux, 108th QM Co., hugs friend Joe B. as buses await to take her and more than 160 of her fellow Soldiers to a destination that will be the first leg of a trip to Iraq. Photo by T. Anthony Bell, Fort Lee Public Affairs.